Does COVID-19 Mark the End of the Handshake Era?

Classic greeting in business and society: Does 2020 mark the end of the handshake? Will we see its significance fade?

“Hi,” I said to the man in the interview room as he stuck out his hand to greet me. He smiled and said hello, but I felt a firmness in the shaking of my hand that let me know he was in control. This was his domain. I was to be subservient. I was only 16, out for one of my first job interviews, and introduced to the world of business and the firm handshake, which I’d learn was what young men were supposed to offer and be prepared for. I was learning about the role dominance plays in workplaces and adult life.

Origins of the handshake

Though the handshake and variations are the typical custom in Canada and western countries, people from Korea, Japan and China consider the bow as their typical custom. In earlier centuries the handshake developed to demonstrate that one was unarmed and honest in intention. It became a common staple of formal interaction in the twentieth century, particularly between men and especially in business situations. In the moment of the interaction a handshake was supposed to represent equal footing or equality between parties.

Nowadays, not even all Canadians prefer the handshake. Some may politely say hello and not offer a hand. Sometimes people will simply nod in greeting. Handshakes are especially reserved for office settings and for the formality encountered in situations like job interviews. Of course, in a virtual meeting or over the phone you’d just say “hi” and ask how someone was doing. If I don’t see a friend for a long time and run into them on the street I might enthusiastically offer a hand for a handshake. In some rare cases we might even give a quick hug. This would be rare however and it is more likely to be a man hug (half hug) than a bear hug.

My experience has been to grudgingly use the handshake. To be truthful, when I was growing up, I often expected a person my senior to attempt to crush my hand. Sometimes even people my age would do that. A friend said he met a businessman who turned his hand as if to say” submit to me” – can you imagine that? It was a mafioso type maneuver but not far removed from my impression that some used the handshake to put you in your place and let you know who was boss.

I found that after SARS in 2002, the handshake faded as a part of the process of making formal introductions. In my twenties I expected interviews to start and end with handshakes but that changed over time. By my thirties in the early 2000s there was a trend toward simply saying hello and offering a seat and warm welcome. This was firmly cemented after SARS made everybody a little extra cautious of touching strangers or objects in public places like escalator handles or subway straps.

It’s been two decades since I developed a reluctance to touch metal surfaces in the metro or grocery store. Now that I’m a parent I’ve become even more reluctant. I think the arrival of Coronavirus and COVID-19 is the death knell for both handshakes, fist bumps and all sorts of touchy feely behaviour. The dreaded handshake may fade but so too will gentle hugs and other signs of affection. Will the air kiss on the cheek also go? It’s likely. In the coming years we will adapt to our new normal and new ways to express ourselves with others in greeting or passing will arise. Maybe a head nod or slight bow will be standard in Canada by 2025? Time will tell.

What are your thoughts? Do we still need the handshake? Let me know what you think!

Students may email me or use our regular file sharing system (Google drive etc). 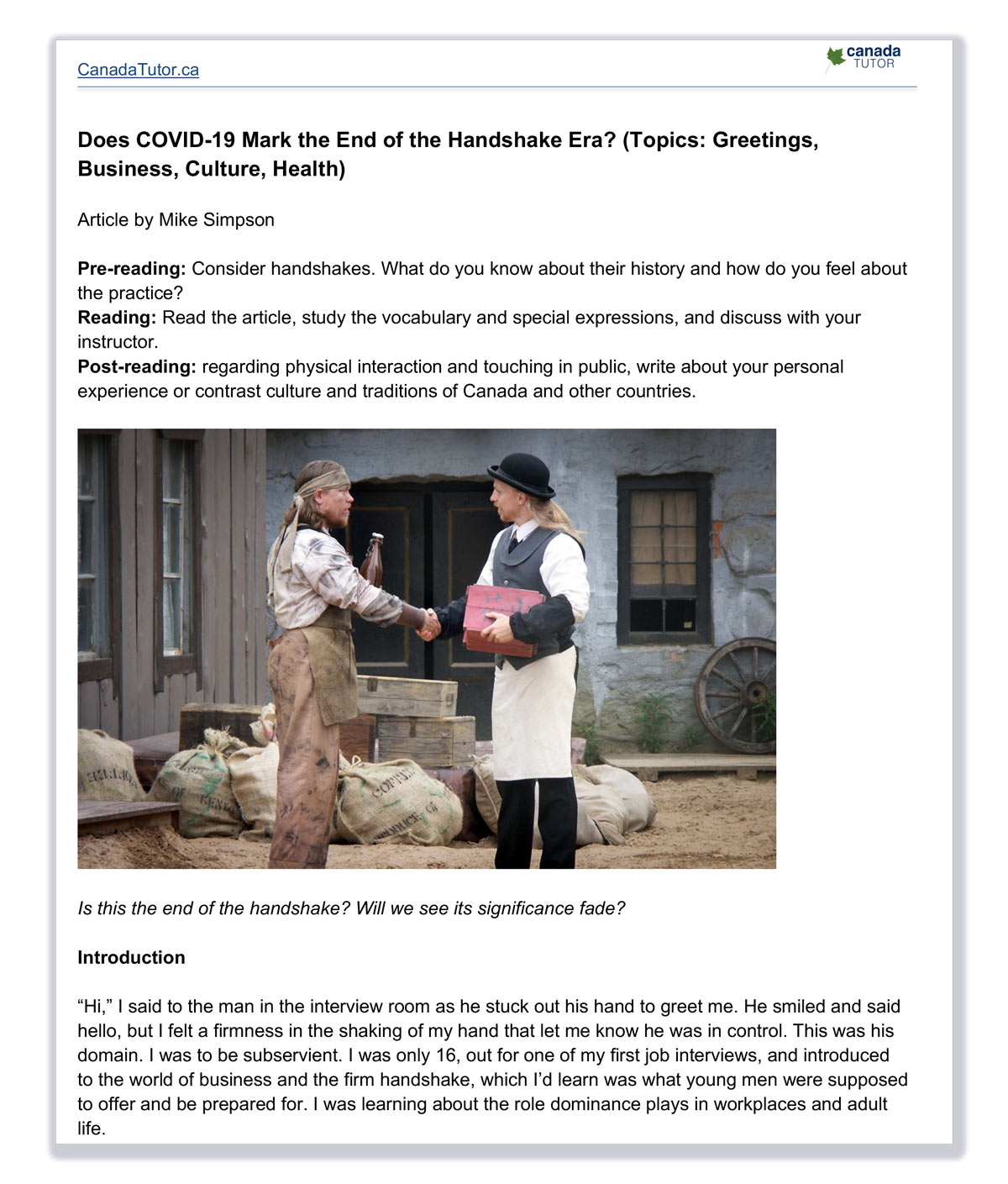 Contact Mike for a free 4-page PDF of this lesson with questions, vocabulary study and suggestions for post-reading writing exercises.

Greetings. I'm Mike, a teacher and designer from Toronto. I am interested in art, culture and design. At Toronto area colleges I teach English and Design. My passion for language, culture and history led me to found the award-winning ancestryproject.ca. I teach creative courses online at Tdot Studio. Hire me - I'm available for teaching positions and private tutoring.